Two alliances of three teams each compete in a race against time of two minutes and 30 seconds and against each other to score as many points by having the robot throw a ball, 2 feet in diameter, into one of their goals. There is a 10-second autonomous period at the start where the robots have to move using preprogrammed instructions, and any points scored during this time are worth more points. The ball shots can be blocked by a “goalie” robot in order to prevent the other team from scoring. 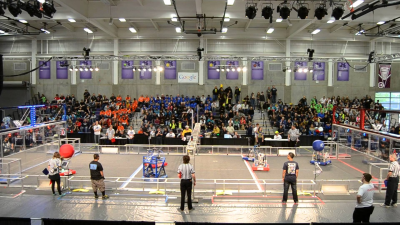